Cayman Brac, 14 miles long and 2 miles wide, has the most dramatic topography of the three Cayman Islands. During the heyday of Caribbean piracy, “The Brac” served as both a haven and a place to replenish supplies – boasting fresh-water wells and myriad sources of food amongst the local flora and fauna. The population of the island remains at about 2,000.

Cayman Brac has a diversity of topography compared to the other Cayman Islands. This results in nature attractions being high on the list of fun activities here. The historic features of the country are also more evident here than in Grand Cayman. There’s plenty to do and see to fill out your vacation.

Although you will likely be only a few steps from the water no matter where you stay on the Brac, you will want to rent a car to truly appreciate the diversity of this island. If you don’t fancy ascending 140 feet on your own power to take in the views at the top of the towering Bluff, hop in a car – and add some of the Brac’s other special features to your tour of the island.

Cayman Brac serves as the government centre for the two sister islands. Many of the branch offices administering Cayman Brac and Little Cayman are located here. The District Administration building houses many of these offices. It is located at 19 Kirkconnell Street in Stake Bay, between the Gerard Smith airport and the western end of the island.

Investment in property is a common souvenir that some visitors partake in. Cayman Brac has a strong real estate market with several experienced real estate agencies. The agents all have local knowledge of this distinctive island and can help you make a purchase of a vacation home or business investment.

From elegant to take out, Cayman Brac has a range of food options for you. Celebrate a wedding or treat yourself to a special night out at one of the fine dining establishments. Or grab a quick bite after a day of diving from one of the fast food shops. In between you will find local specialties and bar and grill favorites. Whether it’s seafood, Caymanian, Chinese or pizza, you’re sure to find filling and tasty food to suit your palate.

Cayman Brac is known for miles of unspoiled reef, all within a close boat ride from shore. With more than 50 sites to choose from – and 11 of these are accessible from shore – you’ll have to visit more than once! The MV Capt. Keith Tibbetts was sunk here in 1996 to create the western hemisphere’s only divable Russian warship. The sea life that has taken residence here has created a new reef for the dive enthusiast. See for yourself why Cayman Brac keeps bringing them back.

Cayman Brac is known for miles of unspoiled reef, all within a close boat ride from shore. With more than 50 sites to choose from – and 11 of these are accessible from shore – you’ll have to visit more than once! The MV Capt. Keith Tibbetts was sunk here in 1996 to create the western hemisphere’s only divable Russian warship. The sea life that has taken residence here has created a new reef for the dive enthusiast. See for yourself why Cayman Brac keeps bringing them back.

Don’t miss an opportunity to pick up a little (or big) something special as a memento of your vacation. Cayman Brac has its own personality among the three islands and this is reflected in the souvenirs and gifts available at the shops here. Be sure to leave room in your bag for that special something for that special someone back home.

Although Cayman Brac is best known as a scuba diving destination, there is plenty here to entertain the non-diver. The accommodations on this sister island reflect the range of activities the island has to offer. Choose an all-inclusive dedicated dive resort. Or spend your time at a secluded farm and garden type home stay. Whether it’s a luxury condo you’re looking for, or a budget holiday flat, Cayman Brac can accommodate your plans and your style.

Cayman Brac has a decent range of services to help you carry out a full traditional wedding – florists, photographers, catering, marriage officers plus a wide range of accommodations from rustic to elegant. You may want to stand atop the magnificent bluff with its sweeping views of the sea from on high, or say your vows on a quiet beach under the palm trees. Or perhaps you fancy a tropical garden for your ceremony and reception. Cayman Brac has all of these options – and you can’t go wrong with any of them.

10 Things To Do In Cayman Brac 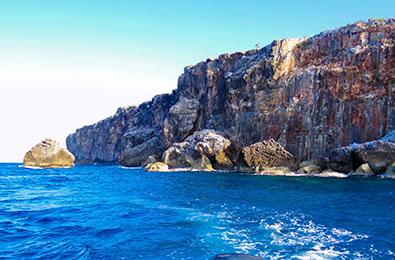 Stand on The Bluff

The word "Brac" is Gaelic for bluff. This massive central limestone outcrop, which rises steadily along the island's east-west axis, reaching 140 feet above the easternmost Spot Bay is the source of the island's name. Dozens of mysterious caves punctuate this awe-inspiring natural attraction, which also contains the Parrott Preserve and the inaccessible 17-acre Splits, where deep natural fissures in the rock provide one of the few year-round sources of water to birds and animals in the Brac.
1 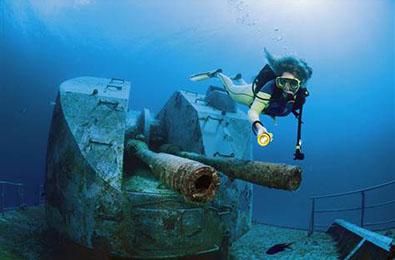 The Brac is famous as one of the best dive destinations in the world, offering more than more than 50 prime sites. Scuba divers are fond of the 330-foot Russian frigate built in 1984 for the Cuban navy. Purchased and sunk by the Cayman Islands government in September 1996, the frigate is located on the island's north side. Near its western tip in a sandy area with good visibility the wreck of the M/V Capt. Keith Tibbetts, a 330-ft. Russian built frigate sunk in 50-100 ft. off Cayman Brac's northwest coast. The view from above will stun you! The Teignmouth Electron, the boat in which Donald Crowhurst attempted to sail round the world single-handedly in the Sunday Times Golden Globe Race, was beached in 1989. Visitors will delight at the coral in Helen's Reef, while Radar Reef, and the west end of the island, offer diverse snorkel and diving activities. The submarine walls around both the Brac and Little Cayman are pictures of perfection, boasting arches, swim-throughs, cracks, gorgonia, sponges and fans. Shine a light on the muted blue structures and watch the reds, yellows, oranges and purples leap out.
2 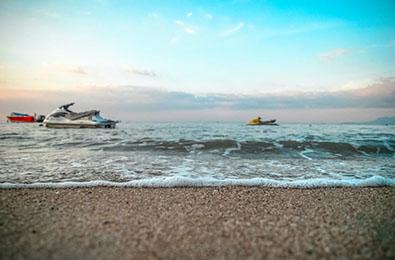 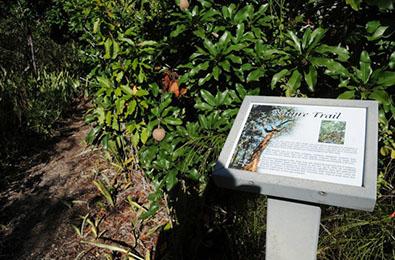 The Brac is listed among the worlds Top 10 exotic climbing sites. Since 1992, walking and hiking trails among the steep terrain have been opened by the Nature Tourism Programme, allowing exploration of the island's dense forestation. Unique flora and fauna thrive everywhere A variety of caves offer even the fledgling spelunker a glimpse of delicate underground formations. Steps and ladders allow access to more remote caves, especially Rebecca's Cave, a Cayman National Heritage Site that contains the grave of a young girl lost in a struggle against the ravages of the great '32 Hurricane. Seven areas on the island and 70 separate routes have been bolted. Most are around the east end of the bluff. The most spectacular sites are below the lighthouse at the far end of the island. Climbers must rappel down the side of the bluff, hanging just above the turquoise reefs, then climb the sheer walls. Safety considerations and some special techniques are required.
4 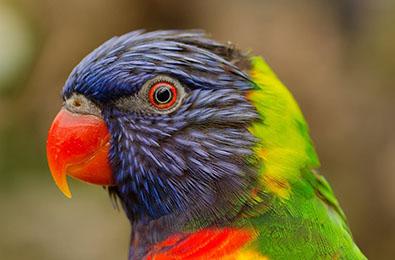 Covering more than 180 acres of woodland on the Bluff, the National Trust Reserve was established to protect the endemic, endangered Cayman Brac Parrot. The Bight Road, a two-mile cross-Bluff hiking trail, as well as other criss-crossing foot paths, offer excellent opportunities to observe local flora and fauna.
5 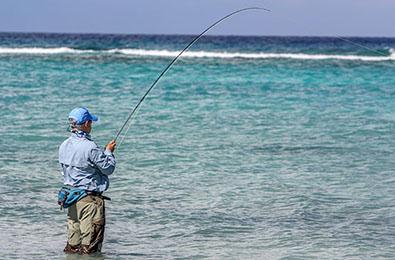 Because of Cayman Brac's unique geographic location, the pristine waters around the island offer superb opportunities for both surf fishing and the pursuit of big game fish. Try bone fishing in the sand flats. Or charter a boat with one of the local companies to take you to the proven hot spots.
6 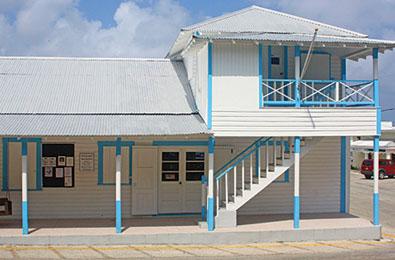 The Cayman Brac Museum in Stake Bay is a combination of museum and art gallery, enlarged and totally renovated as part of the Brac's celebration of the Cayman Islands 2003 Quincentennial. The museum exhibits shipbuilding tools and artifacts used by Brackers for generations.
7 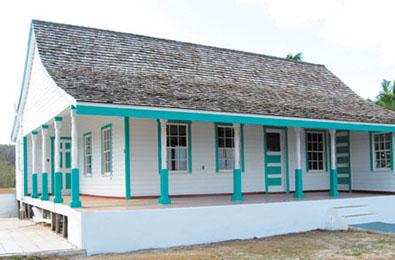 During the hurricane of 1932, the house, though battered and pushed off its foundation, remained intact protecting the 34 people sheltered there. Donated in 2005 as an historic site, it is undergoing restoration. One of the country's few remaining historic houses.
8 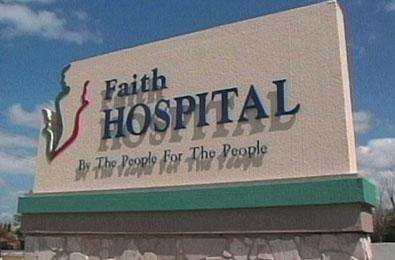 The 18-bed Faith Hospital has more physicians and specialty staff per capita than any county hospital in the United States. Open since 1972, the hospital was originally built by Brac residents who, while recognising the need for a local hospital, had no access to government funds or support. Informal teams of local builders invested their own time, labour and money to construct the buildings on land donated by the late Captain Charles Kirkconnell, The building still carries the legend: “Faith Hospital, by the People, for the People”.
9